The Garden of Broken Dreams

Dramatic, I know. But there's a reason why I haven't done any garden updates recently! I really REALLY had high hopes for my garden this year. Here's the story: The problems started when I started my own seeds indoors. Everything was great until I took the cover off my plants and this pretty little girl, who eats everything from hair to dust bunnies to string, decided the plants were a good snack: 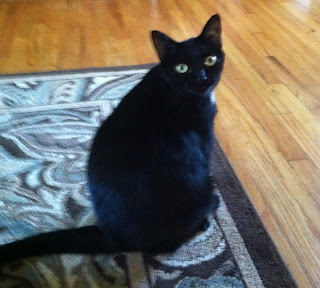 And yes, her eyes are always that wide. .. Unless she's sleeping. Anyway, a piece of poster board to keep the kitty away and the plants were growing again. Then I moved them into my cute little greenhouse outside. 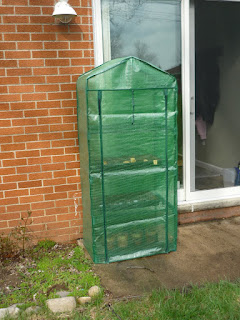 This is a photo from last year, when I was smart and had the long side of the greenhouse against the house. This year .. not so smart! I had it turned perpendicular to the house to allow for a better view of the backyard from the house, and in a strong wind storm, the whole greenhouse tipped over. Onto the ground. With all of my plants inside. Unfortunately I was too distraught to take a photo, but I managed to save a little over half of them.

For deer prevention, I thought I was so clever in fending off the deer. Check out my circus tent style draping of deer netting over the garden: 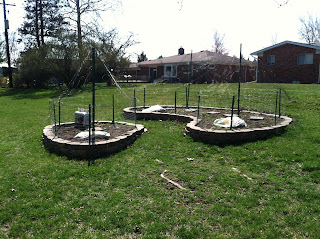 Seems super smart, right? I draped it several weeks before planting so the deer would realize it was there and could even totally destroy it before I put in the plants. We'll come back to the netting. I set up my trellis that I made last summer inside the netting. This is what happened during a tornado warning - destroyed! 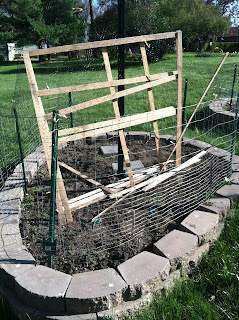 Two words when you make a trellis: wood glue. Along with the staples it probably could've held up. Also, I need to pay attention to wind direction .. again.  I have to admit, this post is kind of fun to put together after the fact, now that the shock of everything going wrong is gone.

Back to the netting. The netting did work, until about three weeks after I planted. Then they decided to just hop through anyway, tearing it down, and eat, eat, eat. Again, distraught moment, no photo. After the first attack, I still had enough plants left alive to re-drape and attach strings to the netting so the deer would maybe notice that it was there. A week later they tore it down again (they liked coming on Sunday nights for some reason..), this time pulling up plants that they didn't eat. Out of twenty tomato plants, most of which I planned on using for canning and I wanted to try some varieties I hadn't grown before, I had eight left. One cucumber plant from two. No squash from one. Thankfully they didn't touch my eggplant, and my three jalapeño plants had enough leaves left for all to survive. Everything that's left is thriving and the deer haven't bothered the small gardens in over two weeks, other than chowing on a tomato plant through the fence. No telling what the yield will be (probably low), but I'm just happy to have tomato plants that have tomatoes on them and a garden that's finally able to grow.
Posted by Linda at 5:53 PM